Home Page Exhibitions Exposições passadas RESTORING THE PAST
Originally the manufacture of Arraiolos carpets was intrinsically related to oriental carpets, becoming, however, progressively independent from this influence by gaining its own identity, especially during the 18th century. The elements that make up this Portuguese carpet-making tradition are present in this example from the MNAA, being perceptible in the insertion of animals of a simple nature and in the blooming of indigenous flowers that start to occupy the field of the artwork, shaping the well-known ‘animal pattern.’
Since, at the end of the 19th century, a movement for the safeguard of the Arraiolos carpet tradition arose to fight its disappearance, this carpet - donated by Gabriel Victor do Monte Pereira (Évora, 1847 - Lisbon, 1911) to the MNAA in the first decade of the 20th century - can also be seen as a symbol of the recent history of this craft product.
With the patronage of Herdade de Coelheiros, a wine producer sensitive to the protection of the local heritage in its material and immaterial dimension, the MNAA restored this magnificent carpet of its textile collections, thus combining two of the most renowned Arraiolos productions. 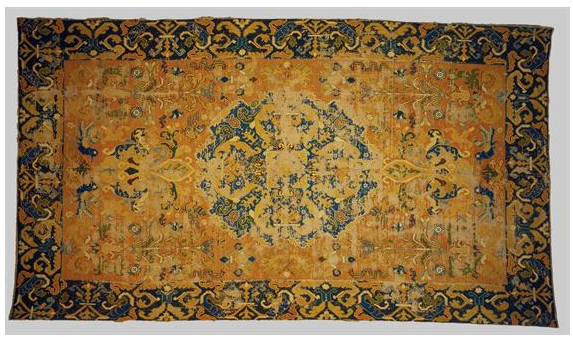